Lin Patterson - At Your Service 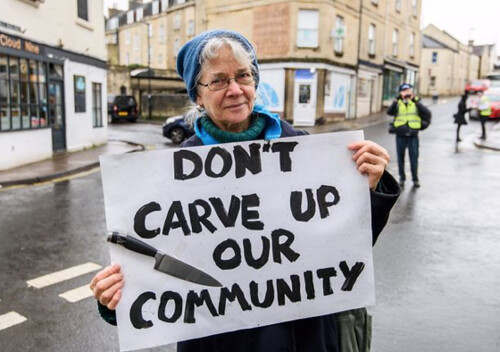 Do you feel consulted?  You are being!  Our area is a hot spot for air pollution from the London Road.   Now the council is consulting us informally until the autumn on three options for a Clean Air Zone, restricting certain vehicles from entering central Bath which is meant to deter these vehicles further out.  “Bath Breathes 2021” is the name of the project, and after you look at their proposals on the B&NES website or attend one of their many events,then you simply email your opinion to environmental_monitoring@bathnes.gov.uk

In the autumn we are promised a six week formal consultation on the worked up Plan. Change is difficult, and considering the options beforehand can allow for better adaptation.

Recently, I took part in an “Anti-idling Action” when, after a brief training, a pair of us approached idling parked cars in the centre to ask in a friendly way if they would switch off, discussing the good reasons for it—one being that pollution is even worse inside the car than outside!  It has made me hyper aware of idling car drivers, and determined not to be one of them.

A bridge is a symbol of connection, and community is all about connecting and sharing, proven to lead to better health, longer life.  Work has been slowly going forward since I wrote a year ago about creating a path between Larkhall and the Gloucester Road, with a bridge over Lam Brook, as in years gone by.  Not only would this give safe access for children to Alice Park, but it would allow residents in Jessie Hughes Court, Pitman Court and Lambrook Court to walk easily to the shops, cutting down on needless car pollution.

Speaking of longer life and sharing, when was the last time you used the NHS?  Grateful?  Concerned about the stress it is under with creeping privatisation and underfunding?  “So much to celebrate… so much to lose,” says the poster about the NHS 70th birthday procession on Saturday, July 7th 2:00pm, starting in Green Park, and ending in an informal ‘bring your own’ picnic in Victoria Park.  See you there?

Larkhall residents have been furious over the detested British Heart Foundation recycling bin misplaced in the Square.  I’m all for recycling, but this obstacle and eyesore attracted thoughtless deposits of discarded clothing and household objects on the surrounding pavement, next to the butchers and private flats, creating a right mess.  I objected in the strongest possible terms to Bath University, who initiated the scheme as a means of helping students decamp, of whom we have very few here, as well as to the council who permitted it, and to the British Heart Foundation.  I was told it would be removed by the end of June, but we need written confirmation it will never return.

Sometimes things take longer than we’d like.  We’re waiting for Wessex Water to connect the water for the new Fairfield Valley Allotments opposite Leigh Close, which, because it requires road closures, might take up to mid July.  Disappointed gardeners have lost a year.

A hopeful initiative, the Bath Cooperative Alliance, has sprung up, meeting in Larkhall, but working to make wider Bath a cooperative city, where a local and mutual economy is built to the benefit of all.  Contact them through the new website, which speaks of building and networking a democratic economy with the values of co-operation and social need rather than competition and private greed.

Please buy from all our wonderful local shops, resisting the pull of larger ones. That way we keep our community intact.