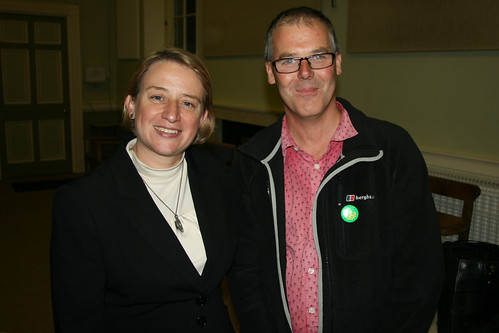 Eric has stood for the Green Party in local elections there since 2003, narrowly missing a seat in 2015. He has also stood as the Green Party's candidate for Bath in two general elections. He has lived in the ward and worked for the NHS at Bath's RUH since 2001.

Eric said, "It's important that residents have a councillor who has a strong connection with and long history of campaigning in the ward. I will take their voice to the council and fight for what residents really need without having to toe the line of the big parties. There is currently a glaring democratic deficit in the council, which a second Green councillor will help remedy.”"

Cllr Lin Patterson, who is currently the single Green councillor, explained "In this by-election residents know that they can vote for what they really want since control of the council won't change - Conservatives will still have a majority. Another Conservative will make no difference. Another Lib Dem will make no difference. A Green, on the other hand, will give the Green Party group status on the council, giving our councillors access to resources and help from council admin staff that every other councillor currently enjoys, but I don't, not being in a 'group'. Another Green councillor will therefore uniquely provide a vital independent voice for both Kingsmead and the whole city."

The votes in Kingsmead ward for the Conservatives, Lib Dems and Greens in 2015 were very close. Labour came a distant fourth, with 404 votes compared to 1,321 for the Greens.

Eric Lucas said, "Greens can win in Kingsmead. I was only 175 votes away from being elected in 2015, so voters can choose a strong, independent voice for Kingsmead and a real voice for our environment and air quality in the city."