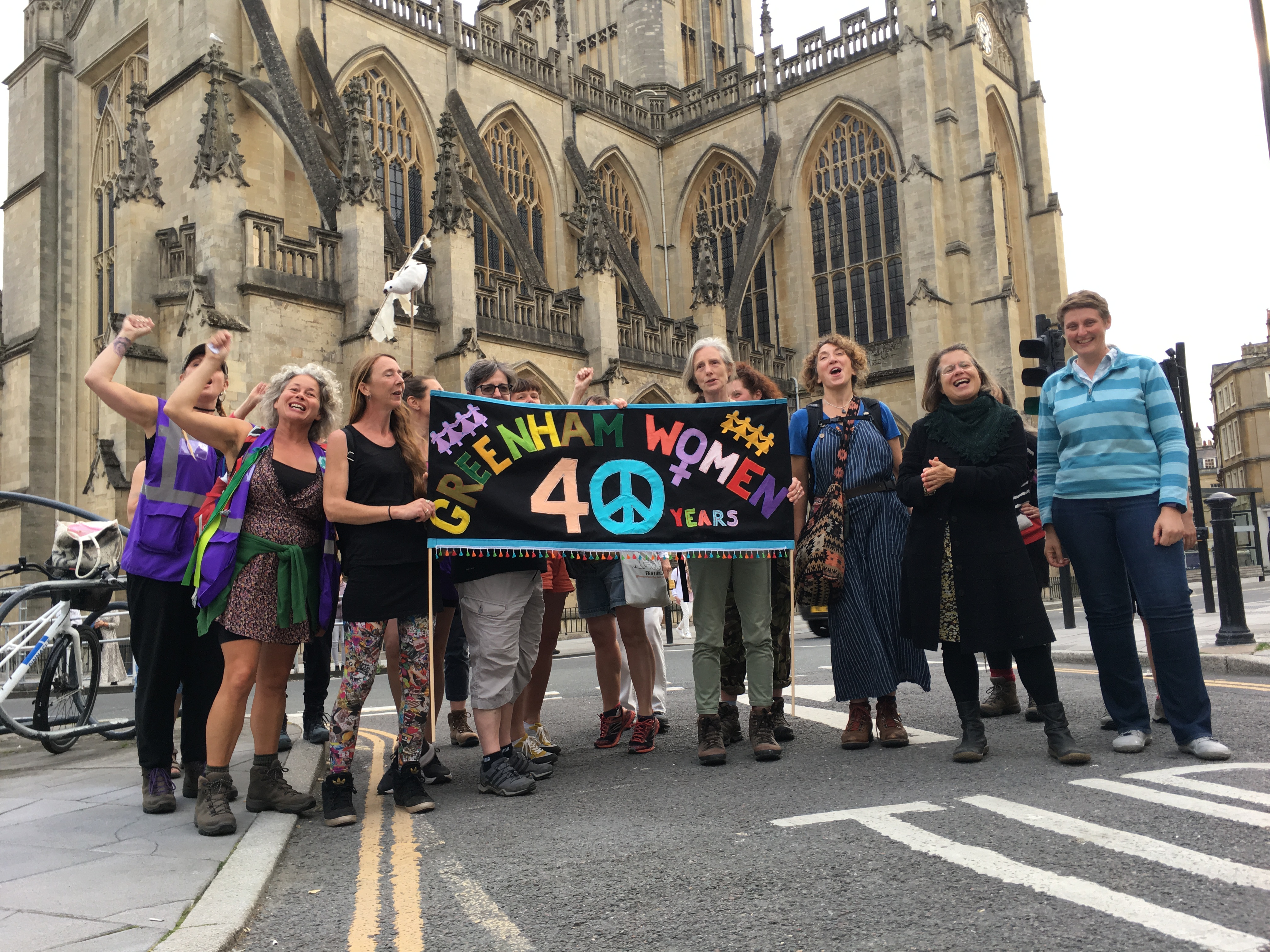 A march marking the fortieth anniversary of the establishment of the Greenham Common Women's Peace Camp arrived in Bath the evening of Sunday 29 August.

Marchers were greeted outside Bath Abbey by Cllr Joanna Wright of Bath and North East Somerset Green Party, and co-chairs Jonathan Oates and Sam Ross, and by a small crowd which had assembled at the University of Bath, at the terminus for the day.

Organised by Greenham Women Everywhere, the march from Cardiff to Greenham Common in Berkshire follows the 110 mile route taken by 36 women in 1981, protesting the storage of US nuclear missiles at RAF Greenham Common.

The protest camp was occupied for nearly twenty years during which time many actions were taken, including, in 1983, the formation of a human chain many tens of thousands strong between Greenham and Burghfield, another strategic nuclear facility.

Four women spoke on what they said was the historic contribution of the Peace Camp and its continuing significance :  Dr Lynne Jones, a veteran of the original camps, Diana Francis of Bath CND and Bath Stop War, Cllr Joanna Wright, and Pam Richards, Chair of Bath Labour Party.

Cllr Wright spoke about the displaced Gilbertese Islanders she had known in her childhood in the Solomon Islands. She said :

“According to British records the Gilbertese were moved to the Solomon Islands because of drought and overpopulation. That was not my parents' view, nor was it that of local Gilbertese people. The Gilbertese believed that they were moved so that during the 1950s the British could carry out nuclear weapons tests. There were a total of 36 British and American nuclear tests in the 1950s. The British undertook tests between 1952 and 1958 on Christmas Island. Of all the Pacific nuclear testing, these were considered the biggest and used the dirtiest bombs and created the most dangerous amount of fallout.”

“Today we are living with what could be called the fallout from our combined civilian and military activity and its contribution to rising oceans and catastrophic weather.  People across the Pacific know that they have done very little to cause climate change, but feel that they are paying the highest price. Islands are impacted by sea levels rising, which in turn contaminates fresh water sources and makes the coastal zone uninhabitable. Some islands in the Solomons have halved in size in the last 50 years. The impact on diminishing natural resources is a recipe for conflict and division.”

“The Greenham Common women have left a lasting legacy that reminds us how important it is to protest and be free from fear. The walk this week (August 23rd - September 6th 2021) from Cardiff to Berkshire to remember these women and their commitment to the future, allows all of us to stand on their shoulders.  We must continue to make visible the social injustices that many people in all corners of the world contend with on a daily basis. We must continue to challenge these injustices without fear.”

The March continued from Bath, on Monday 30 August.